A great deal spritelier than most ninety-year-olds, Sister Loyola is more likely to be found making compost or planting seedlings than idling away her days.

Read more of my review of Gardening With Soul at Green Lifestyle.

From the economical principles behind landfill to the nitty-gritty of how to upcycle chocolate wrappers, Tom Skazy will change the way you think about rubbish.

Read more of my review of Outsmart Waste at Green Lifestyle. 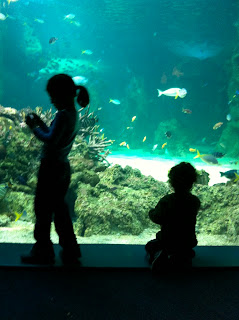 Over Inner Space’s 13 episodes, Ron and Valerie Taylor showcase their impressive knowledge and sheer love of all things marine.

William Shatner’s gorgeous narration (he refers to leopard sharks as “streamlined spaceships of the sea”) and Sven Libaek’s pleasant jazz soundtrack (included on CD) make it easy listening. But the real joy is the Taylors’s boundless curiosity and unfailing bravery. It’s delightful watching them make friends with sea lions and hitch a ride on a giant whale shark.

Produced in 1973, Madman Entertainment pursued Inner Space for many years before managing to secure the rights and release the only commercially available version of the series.

Inner Space is clearly dated, with its slow pace and muted colours. The night diving and close-up camera provide the best-quality footage, and fascinating insights – such as the beauty of tiny hermit crabs and polkadot baby barramundi.

If anything, the series is a little light on facts, tending to give the visuals space to speak for themselves. It may thus appeal more to viewers who know little about marine life. But whether they’re collecting specimens and fossils for scientists or discovering new species, the Taylors’s contribution to science shouldn’t be underestimated.

The footage used in Inner Space was filmed over 10 years, documenting the beginning of the Taylors’s evolution from spearfishing champions to conservation advocates.

The coral-eating crown-of-thorn sea star is demonised as a reef killer – its ecological purpose and causes for its overpopulation are now better known. And I watched in mixed horror and amazement as one of the Taylors colleagues killed a shark (“man’s most-feared, deadliest enemy”) that seemed threatening, then proceeded to deliver her babies when he realised she was pregnant. But the Taylors subsequently endanger themselves to rescue a shark caught in their equipment, even performing shark CPR.

Later, they try to stop divers from killing endangered grey nurse sharks. These small, gentle sharks had a bad rep at the time, and were easy prey for divers looking to kill for sport. Ron and Val were determined to clear their names, and I’m struck by their important role of PR for species conservation.

As Shatner puts it, “it seems like a horrifying debt man is building up against nature”. The series ends by exploring shipwrecks as potential artificial reefs for aquafarming – both for food and as a way to repair the damage people have done to the ocean. It’s clear that the Taylors helped humanity on the road to start paying it back.

We were in Amsterdam last month and we mostly got around like this:

It was pretty awesome, even if we didn’t get to try out a bakfiets because it was too expensive to rent. The bike tracks in Amsterdam weren’t perfect (they did disappear every so often), and riding with kids is always a bit fiddly. But yes, pretty much awesome. I have never ridden a bike without a helmet and the only times I felt unsafe were when I accidentally rode down the bike lanes the wrong way because we drive (and ride) on the opposite side of the road in Australia.

Sydney is always going to be a harder place to ride because of the hills and absurdly narrow streets, but we can do so much better. After reading At War With the Motorist for a while, you really get a sense of how much better.

With all these thoughts in my mind, it was great to see this short documentary about how the Dutch actually got it together:

For once, the “won’t someone think of the children” argument used for good! Here in Sydney, two things hold me back from cycling: the hills and having kids to cart around. There are just some places where the roads aren’t safe to ride with children, but the footpaths are two busy. My commute to work features roads like this. The cycleways in the city are lovely but they’re only part of the picture — most people have to get there first. Maybe we’ll get there after NSW Labor gets its act together. Or something.